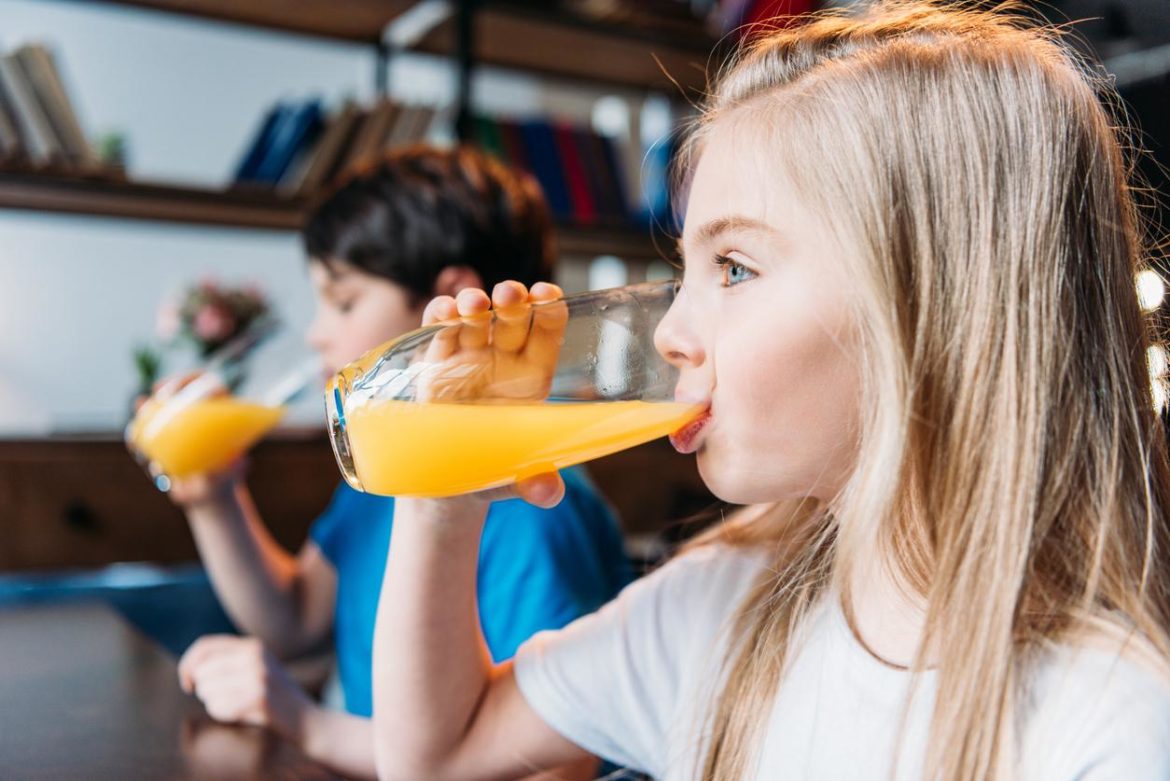 We asked a paediatric dietician if parents should limit their children’s’ juice intake. Fruit juice has long been considered a healthy option for kids, but increasingly, advice focuses on the sugar content and the damage this can do to children’s teeth and health — so, should parents be banning it altogether?

The latest study by Austrian scientists suggests that children who have orange or apple juice for breakfast are 50 per cent more likely to be overweight, so the researchers argue parents should replace juice with a piece of fruit.

They questioned 652 13-year-olds about their diets, and found those who drank fruit juice more than three times a week were 50 percent more likely to be overweight than those who didn’t, while those who drank water saw their obesity risk fall by 40 percent, according to the research published at the European Congress on Obesity in Vienna.

“We are keen to promote the benefits of fruit juice, because it does have vitamins and minerals, and if the bits haven’t been removed there’s more fibre in there,” Pigott told HuffPost. “But what we do know is that it’s very easy to drink large volumes of fruit juice, which provides no additional benefits to a very small amount.”

An option that is healthier for kids, Pigott recommends, is to water down the fruit juice. She says juice is a very high-sugar drink for young kids, so advises parents to dilute it at a ratio of one part fruit juice and four parts water. For older children, she recommends doing half and half but never going above this.

When it comes to quantities, Pigott says to give your child one 100ml serving (that’s the equivalent of one of those small plastic cups you get at parties) of juice per day and no more. This should be in one serving and not spread out, to reduce the damage to teeth, while still counting as one of their five a day.

The time of day they have it, she says, doesn’t make much difference: “We’ve had lots of studies and interest about the time of day for drinks, but everybody responds differently, so we don’t worry about what time you’re having things, it’s just about not going overboard.”

Article by: By Amy Packham
https://www.huffingtonpost.co.za/2018/05/29/breakfast-orange-juice-makes-kids-more-likely-to-be-obese_a_23445189/?utm_hp_ref=za-health-and-fitness

NHI: What Happens To Medical Aids?

How to fix the four biggest sleep disorders

What’s in Your Medicine Cabinet?

Are High Protein Diets Safe For People With...

Hi! Do you use Twitter? I’d like to follow you if that would be ok. I’m definitely enjoying your blog and look forward to new posts.|

Exactly what a man of capacity! You have the capability to write excellent issues that you can’t find at any place. to envy

It’s in fact very complicated in this active life to listen news on Television, so I just use world wide web for that reason, and obtain the hottest information.|

I was so fascinated from your blog. Thank an individual so much.

I’ve been surfing online more than 4 hours today, yet
I never found any interesting article like yours.

It is pretty worth enough for me. In my view,
if all website owners and bloggers made good content as you
did, the net will be much more useful than ever before.

Wow, the writing is so sexy. How could I write like a person? My partner and i want the same writing skills while you.

One thing I enjoy about reading sites like this, is the fact that there aren’t any spelling or even grammatical errors! Causes it to be difficult about the readers sometimes. Excellent job on might also the subject of this site. Many thanks!

I am not rattling wonderful with English but I get hold this really leisurely to interpret .

Oh my goodness! an excellent article dude. Thank you Nonetheless We’re experiencing problem with ur rss . Don’t know why Can not register for it. Perhaps there is anyone finding identical rss dilemma? Anybody who knows kindly respond. Thnkx

Wow, the articles are so sexy. How could I write like you? My partner and i want the same writing skills as you.

At this particular amount, you can debut as a copy writer. I am so touched. Now i’m joyful to meet you. Say thanks to you.

Hey there! I just wanted to ask if you ever have any problems with hackers?
My last blog (wordpress) was hacked and I ended up losing several
weeks of hard work due to no back up. Do you have any methods to stop hackers?

It’s a jealous article. It’s very remarkable and innovative. Who are you to write this special article?

Hey there, tend to be not you too great? The writing widens my understanding. Give thanks you.

[…]Here are several of the websites we recommend for our visitors[…]

Regards to you, I realized something new. Give thanks to a person so much. My partner and i appear forward to working with you.

Thank anyone so much with regard to allowing myself know what My spouse and i didn’t know. I look forward to working with you.

Thank anyone so much to get letting us know what I didn’t know. I look forward to working with you.

I adore the manner you have actually ended this article …

Very few authors with correct knowledge of the topics they blog about.

[…]please check out the web-sites we adhere to, which includes this one particular, as it represents our picks through the web[…]

Thanks to you, My partner and i realized something new. Appreciate you so much. My spouse and i look forward to nearby.

You’re so amazing. Oh my Lord. Lord bless you.

I love your blog. I’m handled. Thank anyone.

Oh my goodness! an excellent post dude. Many thanks However We are experiencing problem with ur rss . Don’t know why Not able to sign up to it. Could there be anybody getting identical rss dilemma? Anyone who knows kindly respond. Thnkx