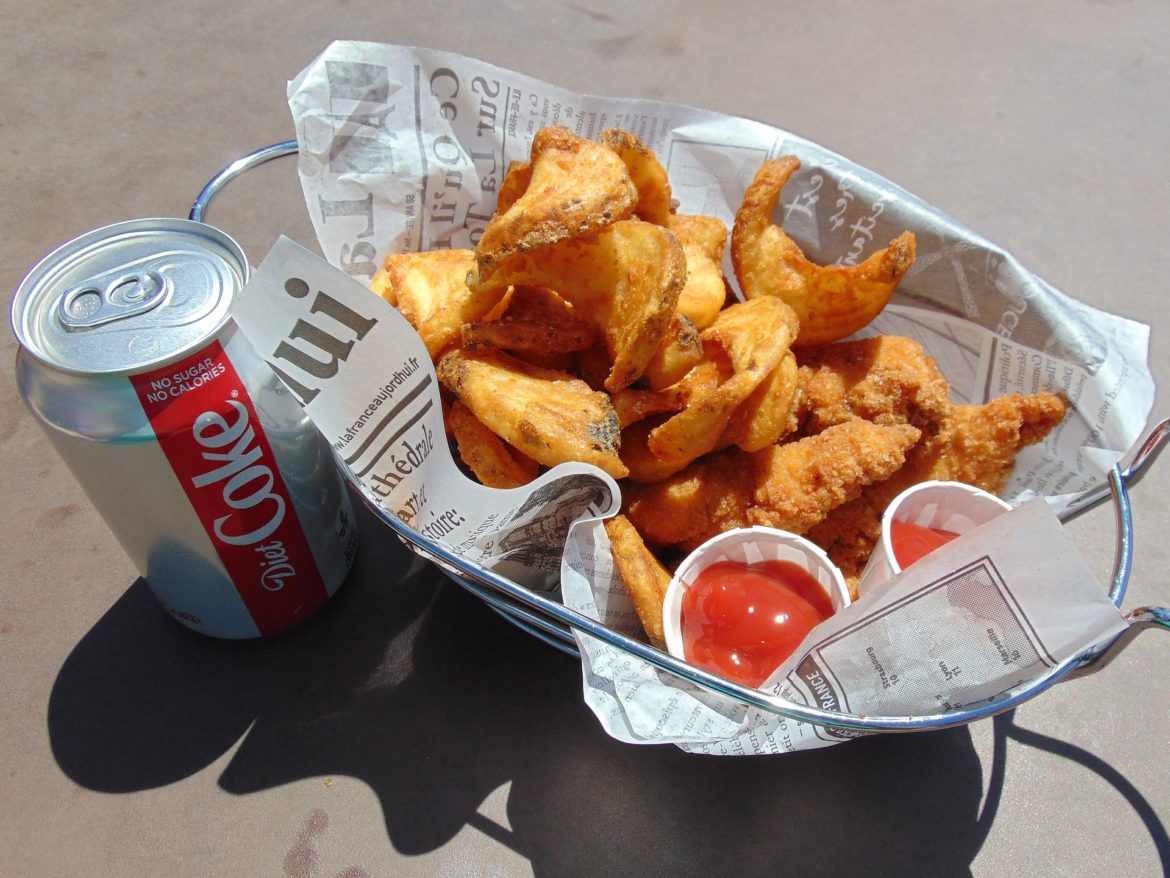 A new study shows that mixing artificial sweeteners with carbohydrates alters a person’s sensitivity to sweet tastes, which may impact insulin sensitivity.

Taste is not just a sense that allows us to enjoy gourmet delicacies — it plays a very practical role in maintaining health. Our ability to taste unpleasant flavors has helped humans steer clear of poisonous plants and food that has gone bad.

But taste can also help our bodies stay healthy in other ways. A healthy person’s sensitivity to sweet taste allows their body to release insulin into the blood when that person eats or drinks something sweet.

Insulin is a key hormone whose primary role is to regulate blood sugar. When insulin sensitivity is affected, many metabolic problems can develop, including diabetes.

New research led by investigators from Yale University in New Haven, CT, and other academic institutions has now made a surprising finding.

In a study paper published in Cell Metabolism, the researchers indicate that a combination of artificial sweeteners and carbohydrates appears to lead to poorer insulin sensitivity in healthy adults.

“When we set out to do this study, the question that was driving us was whether or not repeated consumption of an artificial sweetener would lead to a degrading of the predictive ability of sweet taste,” explains senior author Prof. Dana Small.

“This would be important because sweet-taste perception might lose the ability to regulate metabolic responses that prepare the body for metabolizing glucose or carbohydrates in general,” she adds.

However, the team was surprised to make an altogether different find.

Sucralose and carbs: A bad mix?

For their study, the researchers recruited 45 healthy adults aged 20–45, who said they did not typically consume low-calorie sweeteners.

The researchers did not require the participants to make any changes to their usual diets other than drink seven fruit-flavored beverages in the laboratory. The drinks either contained artificial sweetener sucralose or regular table sugar.

Some participants — who were supposed to make up the control group — had sucralose-sweetened drinks that also contained maltodextrin, which is a carbohydrate.

The researchers used maltodextrin so that they could control the number of calories in the sugar without making the beverage any sweeter.

This trial lasted for 2 weeks, and the investigators conducted additional tests — including functional MRI scans — on the participants before, during, and after the trial.

The tests allowed the scientists to assess any changes in the participants’ brain activity in response to different tastes — including sweet, sour, and salty — as well as to measure their taste perception and insulin sensitivity.

Yet, when they analyzed the data they had collected thus far, the investigators found surprising results. It was the intended control group — the participants who had ingested sucralose and maltodextrin together — that presented altered brain responses to sweet tastes, as well as altered insulin sensitivity and glucose (sugar) metabolism.

To verify the validity of these findings, the researchers asked another group of participants to consume drinks containing either sucralose alone or maltodextrin alone over a further 7-day period.

The team found that neither the sweetener on its own, nor the carbohydrate on its own seemed to interfere with sweet taste sensitivity or insulin sensitivity.

So what happened? Why did the sweetener-carb combo impact participants’ ability to perceive sweet tastes, as well as their insulin sensitivity?

The researchers are, as yet, unable to say for sure, but they do have some working hypotheses.

“Perhaps the effect resulted from the gut generating inaccurate messages to send to the brain about the number of calories present,” suggests Prof. Small.

“The gut would be sensitive to the sucralose and the maltodextrin and signal that twice as many calories are available than are actually present. Over time, these incorrect messages could produce negative effects by altering the way the brain and body respond to sweet taste,” she adds.

This intervention, the investigators say, led to similar effects as the ones that they observed in the current study, which makes them think that the combination of sweeteners and carbs from yogurt may have been responsible.

“Previous studies in rats have shown that changes in the ability to use sweet taste to guide behavior can lead to metabolic dysfunction and weight gain over time. We think this is due to the consumption of artificial sweeteners with energy,” says Prof. Small.

“Our findings suggest that it’s OK to have a Diet Coke once in a while, but you shouldn’t drink it with something that has a lot of carbs. If you’re eating French fries, you’re better off drinking a regular Coke or — better yet — water. This has changed the way that I eat and what I feed my son. I’ve told all my friends and my family about this interaction.”

The investigators are planning to try to find out whether other artificial sweeteners, as well as natural-origin sweeteners, such as stevia, lead to the same effects as sucralose when combined with carbohydrates.

Commenting on the study findings, Sarah Berry, Ph.D. — a senior lecturer at King’s College London in the United Kingdom, who was not involved in this research — notes that the study had a solid methodology, and its result should lead to further investigations around sweeteners and their possible effects on health.

“From a public health perspective, this research is relevant in the context that we typically consume sweeteners alongside carbohydrate-containing foods,” Berry notes.

“For example,” she goes on to point out, “sweeteners are found in many refined low calorie and low sugar foods in conjunction with other carbohydrates.”

Still, she adds: “A note of caution; these results cannot be generalized to all sweeteners because the main types of different sweeteners commonly incorporated into our foods and drinks (including sucralose, aspartame, saccharin, and Ace-K) are metabolized differently and therefore will have different health effects.”

SA Medical Association slated for hiking fees for professionals by 21%

What is the mechanism behind high blood pressure in obesity?

Consuming more of this leafy-green vegetable can combat...

12 Innovations That Will Change Health Care and...

Discovery on the NHI and future role of...

Is Hummus Actually Healthy? Here’s What the Experts...

Hi! Someone in my Facebook group shared this website with us so I came to take a look. I’m definitely loving the information. I’m bookmarking and will be tweeting this to my followers! Outstanding blog and terrific design and style.|

Hi there, simply became alert to your blog thru Google, and located that it’s really informative. I am going to watch out for brussels. I’ll be grateful if you proceed this in future. Numerous folks might be benefited out of your writing. Cheers!|

I love what you guys are up too. This kind of clever work and exposure! Keep up the very good works guys I’ve included you guys to our blogroll.|

Its like you read my mind! You appear to grasp so much approximately this, such as you wrote the book in it or something. I think that you could do with a few to force the message house a little bit, however instead of that, this is great blog. A great read. I will definitely be back.|

It’s very trouble-free to find out any topic on net as compared to textbooks, as I found this article at this web site.|

I have been browsing online more than 2 hours today, yet I never found any interesting article like yours. It’s pretty worth enough for me. In my view, if all site owners and bloggers made good content as you did, the web will be a lot more useful than ever before.|

Hi there colleagues, how is all, and what you want to say on the topic of this article, in my view its actually remarkable in support of me.

I’ll right away take hold of your rss feed as I can not find your email subscription hyperlink or newsletter service. Do you have any? Kindly let me realize so that I may subscribe. Thanks.|

I have learn some good stuff here. Certainly value bookmarking for revisiting.
I wonder how much effort you put to make this kind of magnificent informative site.
adreamoftrains web hosting reviews

Greetings from Los angeles! I’m bored to tears at work so I decided to browse your site on my iphone during lunch break. I really like the knowledge you present here and can’t wait to take a look when I get home. I’m surprised at how fast your blog loaded on my phone .. I’m not even using WIFI, just 3G .. Anyways, wonderful blog!|

Hi there! I just wish to offer you a big thumbs up for your great information you’ve got right here on this post. I am coming back to your website for more soon.|

Useful info. Fortunate me I discovered your web site by chance, and I am stunned why this accident didn’t came about in advance! I bookmarked it.|

Great information. Lucky me I recently found your website by chance (stumbleupon). I’ve saved as a favorite for later!

I was able to find good info from your content.

I’ve been browsing online more than 3 hours as of late, but I never found any interesting article like yours. It is pretty price enough for me. In my opinion, if all site owners and bloggers made excellent content material as you did, the web will be a lot more helpful than ever before.|

This excellent website really has all of the information and facts I wanted concerning this subject and didn’t know who to ask.

You have made some decent points there. I looked on the web for more information about the issue and found most people will go along with your views on this web site.

I really love your blog.. Very nice colors & theme. Did you make this amazing site yourself? Please reply back as I’m planning to create my own personal site and want to learn where you got this from or exactly what the theme is named. Thanks!

I simply want to tell you that I am just very new to blogging and absolutely liked this web blog. More than likely I’m planning to bookmark your website . You absolutely have great posts. Kudos for sharing with us your web page.

I뭢 impressed, I must say. Seldom do I encounter a blog that뭩 both equally educative and amusing, and without a doubt, you’ve hit the nail on the head. The issue is something which not enough people are speaking intelligently about. Now i’m very happy that I found this during my hunt for something relating to this.

Hello! I just wanted to ask if you ever have any issues with hackers? My last blog (wordpress) was hacked and I ended up losing many months of hard work due to no backup. Do you have any solutions to stop hackers?|

Why users still make use of to read news papers when in this technological globe all is existing on web?|

Its such as you learn my mind! You seem to grasp so much approximately this, such as you wrote the guide in it or something. I feel that you just could do with some percent to pressure the message home a bit, but instead of that, this is fantastic blog. An excellent read. I’ll certainly be back.|

Your mode of telling all in this paragraph is truly nice, every one be capable of effortlessly understand it, Thanks a lot.|