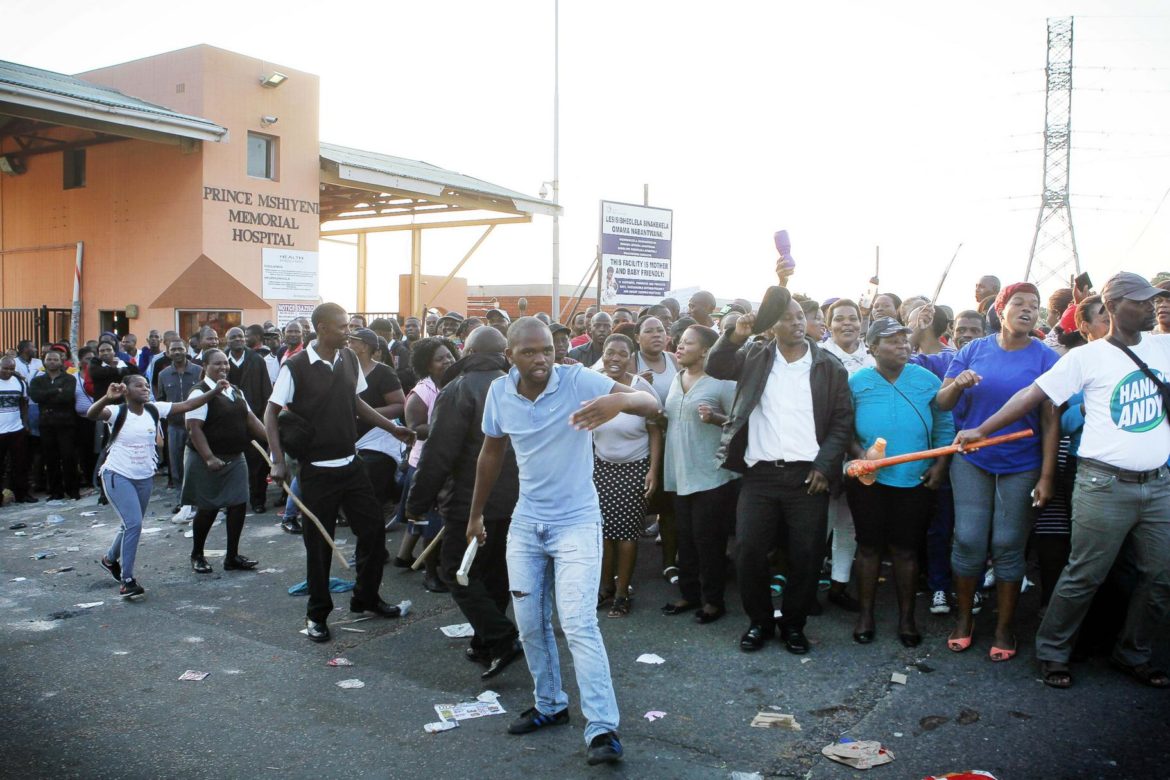 Around 400 national Department of Health employees, who work at a building in Tshwane, staged a protest on Thursday to demand that they are moved for their own safety.

Staging a sit-in in the reception area of the Civitas building, which houses the national health department, the employees vowed to not work until Minister of Health Dr. Aaron Motsoaledi provided an alternative workspace and attended to issues at the building.

The protest action comes after the National Education, Health and Allied Workers Union (Nehawu) decided to approach the court for an order declaring the building unsafe.

Nehawu spokesperson Khaya Xaba added that they would also seek an interdict to stop the government from applying the no-work-no-pay principle while workers choose not to enter the building. The union said the Civitas building has been not complied with occupational health and safety standards since 2015.

Nehawu shop steward Bhungani Mzolo said an unsafe amount of carbon dioxide was present in the building because of an issue with the ventilation and that there was no water in the building for the sprinkler systems or bathrooms.

“So if there was a fire now, the building would burn because there is no water to make sure the sprinklers are working,” said Mzolo.

He added that old dusty carpets also posed a health risk, especially for those who have existing respiratory issues.

“We have expected by now to find an alternative building for us to go and work, but they still haven’t done it and now we are expecting a report from the minister that shows either he has found an alternative place for us to work or to tell us what he is going to do to fix the issues that are here.”

“We think it’s irresponsible, especially because the Minister of Health is a doctor himself. It’s just unbelievable that he would want to force people to work in a building that does not comply with occupational health standards.”

Commenting on Nehawu’s allegations, health department spokesperson Popo Maja said the building had not been declared uninhabitable and that the issue was now before the court.

“The court will adjudicate on this and we abide by the decision of the court,” said Popo.

He added that, while the employees raised legitimate concerns, he condemned what he termed as employees’ violence and intimidation tactics during the protest.

Popo said the department also approached the court to interdict this behavior.

Nehwau also laid the blame at the door of the Department of Public Works, saying it was responsible for the state of government buildings.

“As Nehawu, we are extremely unhappy with the inability to shoulder the blame for the state of the Civitas building by the Minister of Public Works,” Xaba said.

“The department is responsible for maintaining government buildings and ensuring that they comply with health and safety standards. Therefore, we call on the minister to stop shifting the blame and accept responsibility for the hazardous state of the building.”

READ: Spotlight on another govt building after deadly Joburg blaze

On Wednesday, the Poyntons building in the Tshwane CBD, which hosts the Department of Correctional Services, was evacuated and shut down indefinitely after it was found to be non-compliant.

“It was evident during the inspection that the building does not comply with the minimum fire safety requirements set for a building of this height,” Msimanga said.

“The building of 32 stories and of a height of about 100 meters, with approximately 1 700 occupants, does not have any firefighting water inside [it].

“Further, various other life-threatening conditions exist in the building that warranted the closure of the building.”

Last week, three firefighters died in a blaze at the Bank of Lisbon building in Johannesburg, which housed the Gauteng departments of health, human settlements and cooperative governance and traditional affairs.

A report found that the building was only 21% compliant with health and safety standards.

We reserve editorial discretion to decide what will be published.
Read our comments policy for guidelines on contributions.

These Are The 5 Worst Types Of Headaches You Can Have

Do we really need 8 glasses of water...

Foods to eat and avoid while breastfeeding

5 reasons why you should not eat the...